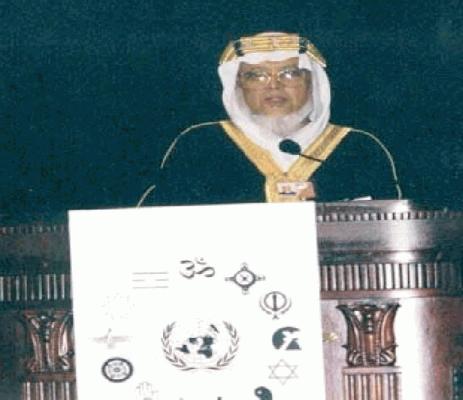 New York,United States — In August 2000,Sheikhul Islam Shahzada Syed Mainuddin Ahmed has attended the Millennium Peace Summit for Religious and Spiritual leaders ,organised by the United Nations. He was among the 1000 spiritual leaders that attended the summit from around the globe. He represented Bangladeshs 140 million Muslims, in the highly anticipated event. Shahzada Syed Saifuddin Ahmed accompanied Syed Mainuddin Ahmed throughout his stay in the United States. Syed Mainuddin Ahmed, along with his son Syed Saifuddin Ahmed arrived at Kennedy Airport on the 18th of August, where they were warmly received by devotees of the Maizbhandari Order.

All major faiths of the world, such as Bahai, Buddhism, Christianity, Confucianism, Hinduism, Indigenous, Islam, Jainism, Judaism, Shinto, Sikhism, Taoism and Zoroastrianism were represented in the Peace Summit to ensure Worldly Peace among all religions and traditions. As a spiritual leader, Shahzada Syed Mainuddin Ahmed was the only one representing Islam from Bangladesh.
The Millennium World Peace Summit which lasted for three days from 28th to the 31st of August brought together many of the worlds most illustrious religious and spiritual figures. Shahzada Syed Mainuddin Ahmed and Shahzada Syed Saifuddin Ahmed met & exchanged opinions with many distinguished scholars and spiritual leaders. It was also a great opportunity to showcase the Maizbhandari Order to the rest of the world, and Syed Mainuddin Ahmed did that very successfully when he delivered the following message to the other representatives:
Hazrat Muhammad (SA), the greatest prophet, promulgated the charter of Medina with a view to establish peace and harmony in the world. The charter is being treated as the First written constitution the world has ever had. It is the document through which all the human beings, irrespective of caste, creed and religion have guaranteed human rights. The UN charter which formulated in 1948 speaks for establishing human rights and global peace is quite similar to the Medina Charter. Let the motto of the current century be stop destruction, establish peace. We want friendship, not terrorism. Hope the 21st century would be treated as an unparallel milestone for establishing world peace. Let mutual respect be the slogan of the century. We are committed to building a non-communal world.
His message was followed by a great applause by the other representatives. After the speech, at the closing plenary prayer session, Syed Mainuddin Ahmed placed Darud, Salawat, Mawlid & Munajat according to the Maizbhandari Order. Following the prayer session there was a standing ovation for Syed Mainuddin Ahmed , by the other representatives.
Kofi Annan, the secretary general of the UN addressed the gathering on the 29th of August said,
“This gathering of the world’s preeminent religious and spiritual leaders in a united call for peace will hopefully strengthen the prospect for peace in the new millennium.”
After the conference, all the representatives signed a Declaration for World Peace, and the summit was called to an end. Shahzada Syed Saifuddin Ahmed called it one of the most wonderful memories of his life when he accompanied his father to the famed stage of the UN Hall Room.Also accompanied Syed Mainuddin Ahmed there were the following local devotees Shaheen Mahmood,Nawshad Chowdhury , Amir Ali & Mr. and Mrs. Syedur Rahman Dastagir.