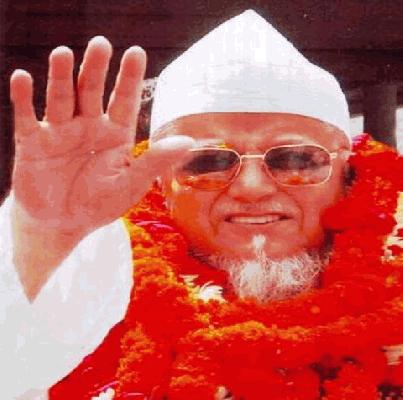 With remembrance of Allah, who is the creator, the most affectionate, the merciful. Thousands of Durud and Salam upon our beloved Prophet Hazrat Muhammad (peace be upon him and his family and companions). Prophet Muhammad (SM) opened a new way of salvation that is Islam. In the holy Quran Allah says,
In-nad dina indal-la-hil Islam”
Of course, Islam is the only religion Allah refers.

Inna Allah yabath li-hadhihi al-umma ala ras kull mia thana man yujaddid laha amr diniha
—Most surely Allah will rise from his Ummah at the commencement of every century one who will bring about the revival of their religion.

Now the question is who will be the Reformer (Mujadded) Mujadded are described in the prophetic tradition as coming at the start of every century. They are not innovators, they are followers. That means they do not create anything themselves, they do not bring any new ordinances, they adjust and strengthen religion by way of following to the letter the fundamentals and ordinances of religion and the sunnah of the Prophet Muhammad (SM), they carry out their duties through new methods of persuasion appropriate to the understanding of the age, and in new ways and with new details.

Muslim ummah had many such Mujaddeds through out its history. Since 14th century, many reformers came in the world and fight against Khareji, rafeji, Mutajila, Jabaria, kadaria, sia, Ahle hadith, kadianis, wahabis. Now hijri 15th century is running but who is the Reformer?

If we want to find answer of this question then we must consider of our worlds Muslim scholars. At first, we find a glossy name; he was the president of world Ahle Sunnat Wal Jamat, 30th descendants of Prophet Muhammad (SM), Shaikhul Islam, The Grand ambassador for Islam and Peace Shah Sufi Syed Mainuddin ahmed Al-Hassani Wal-hossaini Maizbhandari (KA). He was the Sajjadansin of Maizbhandar Darbar Sharif Chittagong, Bangladesh. Who sacrificed his life for Human love and to show a right way according to the demand of Age.
At first we need to know about the condition to be a Reformer.
1) Time 2) Followers of Ahle Sunnat Wal Jamat. 3) Religious Disciple 4) World famous person 5) Attraction to Allah 6) Expert of Islamic Knowledge 7) Spiritual Knowledge 8) Sacrifice Life 9) Absolutely Fearless 10) Acceptance of Islamic Scholar 11) Lecture ability 12) Advice for honesty
1) Time : Our prophet Muhammad (peace upon him ) said At turn of every century of the lunar calendar a reformer will come who would renovate the faith
Allma Hakki (Rh) said The time frame of a Reformer would be ending of a century and he was expressed as a reformer at the beginning of the next century Syed Mainuddin Ahmed Maizbhandari was born in1358, Hijri and died in 1432, Hijri. Here we can see, the time duration is perfect for an Islamic scholar to be a reformer. It was a succeed time for being reformer of Syed Mainuddin.
2) Followers of Ahle Sunnat Wal Jamat: Prophet Muhammad (Peace upon him) said My followers will be divided into 73 sects but 1 sects will be in Jannah, they are followers of Ahle Sunnah” As a follower of Ahle Sunnat Wal Jamat, Sayed Mainuddin heartily believed in Sunnism. He was the President of World Ahle Sunnat Wal Jamat from 1998 to till death.
3) Religious Disciple: Syed Mainuddin was self-sacrifice Religious Disciple. He traveled place to place all over the world to spread Islam. He went America, England, Canada, France, Japan, Germany, Singapore, Thailand, UAE, Malaysia, Saudi Arabia, Qatar, Ghana, India, Pakistan, Uzbekistan, Russia, Taskhand, Samarkhand, Mayanmar. Sayed Mainuddins approach towards religion love has been much-admired in the international arena.
4) World famous person: A reformer has to be a famous person in the World and time. Syed Mainuddin Ahmed is 30th descendant of Prophet Muhammad (SM), He is also descendant of Gausul Azam Abdul Quadir Jilani. Gawsul Azam sayed Shah Ahmad Ullah Maizbhandari is his great grand father, who is the founder of Tarika-E Maizbhandari. Gausul Azam Shah Gulamur Rahman Maizbhandari is his grand father. Syed Mainuddin Ahmed Al-Hasani Wal Hossaini Maizbhandari(KA) got honor of Shaikhul Islam, Ambassador of World Peace, and The great Sufi in the World. He was the President of Ahle Sunnat Wal Jamat of Bangladesh and President of World Ahle Sunnat Wal Jamat also. He was the leader and Sajjadansin of world famous Tarika-E Maizbhandari, Maizbhandar Darbar Sharif, Chittagong Bangladesh. As we can see, Sayed Mainuddin is a famous person in the World and time.
5) Attraction to Allah: Sayed Mainuddin was a believer of Islamic Sharia. He was busy with the recollection of Allah. Baba Mainuddin said, Make your heart fresh with the remembrance of Allah He always encourages his followers for Zikr (remembrance) to Allah.
6) Expert of Islamic Knowledge: Syed Mainuddin was not only a Islamic Scholar but also he had knowledge about different religions, science, philosophy, commerce and International affairs. He could give speech and discuss about the other religions matters as well as problems.
7) Spiritual Knowledge: A reformer also has a spiritual knowledge. Syed Mainuddin Ahmed empowered with great spiritual strength. Millions of believers would be beneficiary by his spiritual power.
8) Sacrifice Life: Syed Mainuddin Ahmed sacrificed his life for religion and mankind. He led his conjugal life only fourteen years. After death of his wife he didnt marry again just cause of love Allah and his Prophets saying preaching to home & abroad which is the real way to get freedom from all shorts of sin.
9) Absolutely Fearless: Syed Mainuddin Ahmed heartily serves Sunnism and Sufism. He never thinks for himself, He was absolutely fearless. He Said, If bloods need for Sunnism, I will be the first.
10) Acceptance of Islamic Scholar: The world famous Islamic Scholars accept him as a great Sufi Saint.
11) Lecture Ability: A Reformer must have ability to deliver speech. Syed Mainuddin Ahmed was a person who can win listeners mind and heart within a very short time by his incredible speech. He was able to speak in English, Arabic, Urdu and Persian. His knowledge was like a ocean.
12) Advice for Honesty: Our Holy Prophet (SM) always gave advice to his followers to be honest. Syed Mainuddin Ahmed also gave advice for honesty to his Devotees. Syed Saifuddin (Syed Mainuddin beloved son) Says, My Father always gave advice to his followers for peace, human love, honesty, harmony and brotherhood.
13) Spread of Islamic Education: Our Prophet Muhammad (Peace upon him) said, “Acquiring knowledge is Farz (crucial duty) for every Muslims”. Syed Mainuddin was a literate person. He liked acquiring knowledge. He established 127 institutions those are spreading Islamic knowledge at home and abroad.
14)
Sayed Mainuddin Ahmed Maizbhandari’s renovation as a reformer:

After completed of graduation syed Mainuddin started his life as a banker. But only age of 24, on the 5th of April 1962, in the day of Urs sharif of Syed Gulamour Rahman (Baba Bhandari), his honourable Murshid and father Shah Sufi Syed abul Bashar Maizbhandari ( Son of Baba Bhandari) gave/bestowed him with very special ‘Bayet-e-Khas’. This special Bayet empowered him with ‘Belayet'(spiritual strength).Taking responsibilities of Maizbhandar Darbar sharif as a Sajjadanshin, Syed Mainuddin sacrificed his own life for Islam and Tarika-E Maizbhandari. Islam doesn�t support terrorism, scuffle, plundered, killing, and conversion by force. Islam is the only religion of peace. Baba Syed Mainuddin Ahmed Maizbhandari expressed this ideology of Islam to his followers. He said,

Islam means peace, Total peace. It is a religion of love, Love for Creators and his Creation

Human Love is the Philosophy of Tarika-E Maizbhandari according to Syed Mainuddin Ahmed. He always tries to make understand people that, Love is the best way to invite people to Islam. As a reformer, almost 5 decades he traveled to the whole world to spread messages of human love. He established many Mosque, Madrasha, Orphanage, and Welfare Institution in several countries. He started the Jashn-E-Julus Eid-E-MiladunNabi (SM) since 1992 in Dhaka. Now a day, His followers celebrate this Jashn-E-Julus in many countries. He is a founder of Mosque in Thailand first. He started ‘Azan’ and opened lock from mosque in Russia. Syed Mainuddin Ahmed read the holy Quran and Milad (Durud) in the conference of United Nations first. He also established Anjuman-E-Rahmania Mainia Maizbhandaria, Baba Bhandari research Academy, Syed Mainuddin Ahmed Maizbhandari Foundation, Sufi unity for International Solidarity and other 127 institution. Baba Syed Mainuddin Ahmed published Monthly Noor-E-Rahman, Quarterly Sufis for delivered Islamic Knowledge and Sufism. He established numerous centers of his order in different countries called Maizbhandari khankahs (Centers of perseverance). He was succeeding to spread the message of peace and human love to the worldwide. Near by One Lac Different religious people come to the shade of Islam by saying Kalimah (La Ilaha IllallahuMuhammadur Rasulallah) through Syed MainuddinAhmed Al-Hasani Wal Hossaini Maizbhandari(KA). 10 Millions Of followers, 300 Representatives (Khalifa) of Syed Mainuddin are working in the International arena.
Syed Mainuddin elected the president of Ahle sunnat wal Jamat, Bangladesh in 1988 and in 1998 he also elected as a president of World Ahle Sunnat wal Jamat.Syed Mainuddin regularly attended the Symposium of International Association of Sufism in America and elected as an advisor. Syed Mainuddin Ahmed Maizbhandari achieved the title of Sheikhul Islam in 1997. The national council of Ghana and U.S. based Universal Islamic center gave him designations Worthy Grand Ambassador for Islam, universal peace, Reconciliation, Spiritual uplift of Humanity International Award of the decade for the year 2005. He gained the Sufi Awards in 2004 from Sufi Mazlish Bangladesh.
Syed Mainuddin Ahmed Joined The millennium world summit of religion and spiritual leaders 2000 organized by United Nations. Our Prophet Muhammad (SM) showed the best example of human love by ‘Madina Charter’. Syed Mainuddin Ahmed Maizbhandari (KA) called the world community to follow ‘The Madina Charter’ to establish the global peace. Baba Syed Mainuddin Ahmed was a symbol of divine love. His theory and guidance are giving uncounted people the direction to enlightened way. The way of Salvation written by Syed Mainuddin Ahmed Maizbhandari is a book for those people who love to see the right path of truth.

From village of Maizbhandar situated in Fatikchari Upazilla under district Chittagong, Bangladesh, Syed Mainuddin run fast to boundless region. Today his theory of Human Love is a known ideology to rest of the world. All of his institution and Khalifa spread this theory everywhere. He is a great religious disciple. Syed Mainuddin Ahmed Maizbhandari is now a name of a saint whose contribution to human welfare, love and spiritual uplift is globally endorsed and acclaimed.