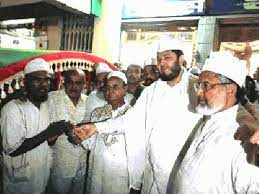 Knowledge saves men from destruction: Saifuddin Maizbhandari
Spiritual personality Syed Saifuddin Ahmed Maizbhandari on 31st December 2011 said access to knowledge sources should be open to all as the knowledge inspires people to work for mankind.
“The knowledge saves one from destruction and inspires him to
work for mankind,” he told the opening of a madarasah in
Meghnaghat area at Gazaria of Munshiganj at the city outskirts.
Saifuddin Ahmed said Islam never support destructive
activities of any type and that is why one should devote himself
in acquiring worldly and divine knowledge for his own wellbeing
and social welfare.
Chairman of parliamentary standing committee on Defence
Ministry Idris Ali MP, who was elected from the area, joined the
function as the chief guest with Shamsul Haque Maizbhandari in
the chair.
Local officials including Upazila nirbahi officer and a
number of followers of the maizbhandari school joined the
function marking the opening of the Meghnaghat Rahmania Moinia
Sunnia Madrasah Hefzkhana and Orphanage Complex.