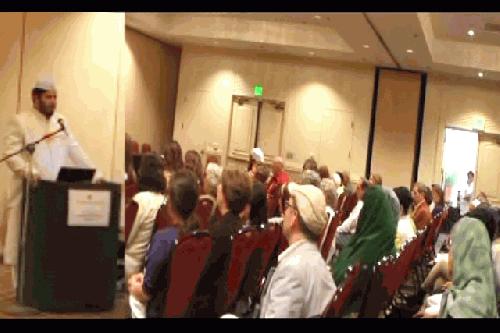 Honourable Descendant of holy Prophet (sm) Syed Saifuddin Ahmed Al Hasani Wal Hossani Maizbhandari attend in the seminar of Humanity & 21st Century arranged by International Association of Sufism California U S A on 25-27th June 2010.On his speech he said that for building love among each other the Wali Aulias played a big role as the representative of Prophet(sm).on this occasion he said that,
It is a great pleasure for me to speak on this august gathering on human dignity and 21st century. I would like to thank co-founder of the international association of Sufism Dr Syeda Nahid Angha and Shah Nazar Sayeed Ali Kianfar for giving me the opportunity to speak at this wonderful conference.
Firstly,I would like to say something about Maizbhandar and its order. Maizbhandar is located at Fatikchari,which is 25 miles away from Chittagong, Bangladesh. The Maizbhandari order was formed by Gausul Azam Hazrat Ahmad Ullah(K),who is the 27th descendant of holy prophet Muhammad (SM) and was brought to great prominence by Gausul Azam Hazrat Gulamur Rahman (Baba Bhandari),the nephew of Gausul Azam Hazrat Ahmed Ullah. Maizbhandari order signifies Unworldly love for the divine, for Allah and his Prophets. It is only with love for Allah that the most devilish of forces can be overcome.
Maizbhandari philosophy is an important aspect of Belayet-e-Mutlak (liberated Sufism).Gausul Azam Hazrat Ahmed Ullah (k) is the founder of Liberated Sufism in the Islamic world and is recognized as Gausul Azam (Rank of highest spiritual level) along with Gausul Azam Hazrat Abdul Quader Jilani of Baghdad, Iraq. The great Spanish saint Mohiuddin Ibne Arabi(1165-1240)in his classical book Fusus Al-Hikam(chapter two,last paragraph) predicted the birth of Gausul Azam Hazrat Ahmad Ullah(k).The great grandson of Ahmed Ullah, Syed Mainuddin Ahmed carried the spiritual torch and tradition to maintain the spiritual connectivity with origin.At present,Syed Mainuddin Ahmed inherits the spiritual legacy to shape the present.These spiritual celebrities passed the legacy to their few chosen descendants who in turn empowered and enlightened many spiritual vice-regents to serve millions of devotees across the Bangladesh,South Asia and the globe.
According to the Quran,it was for man that the world was created:It is He who created for you all that is (Sura AlBaqarah:29).
The Quran described man as the paramount and best creation in the whole Universe.We have honoured the children of Adam and guided them by land and sea. And provided them with good things and exalted them above many of our creations.(Sura Al- Isra: 70)
What can affirm human eminence and honour better than the following observation by the Prophet of Islam: The entire creation constitutes the family of Allah and he is dearest of him who is the best in his dealings with Allahs family.
15 centuries ago, when human has been declared as the exalted above creation it was also bestowed with the responsibility to take care of other creations along with respecting and caring other humans views and norms.
All those who know about the social and political condition of the world prior to the advent of Islam can appreciate the determined efforts the Prophet made in order to drive home the concept of the worth and dignity of man.
Before the prophet hood of Muhammad (SM), the lives of in countless human beings depended on the whims of a single individual.Any tyrant could have caused bloodshed across countries and continents to gain political ascendancy or just satisfy his devilish desires.
Before the prophet hood of Muhammad (Peace be upon him) little regard for human life among the Arabs had made fights and forays a pastime for them and even the most trivial matter could lead them to the battle- field.
But after the prophet hood of Muhammad(SM) the moral teachings of Islam created such a strong sense of human dignity that one never treated another person as a sub-human being. A Muslim never treats another man as a chattel or slave nor discriminates between him and others.
In the 21st century we are again seeing the trampling of human dignity in the form of conflicts between races in the question of establishing supremacy. We are not taking care of the whole creation as directed by the Almighty as a result human being is facing desertification,global warming,fresh water crisis and many other disasters.We have established Mainia Foundation,is a non Government,non-profit development and multidisciplinary welfare oriented organization without any political affiliation.A group of dedicated philanthropists from all classes of the society including spiritual leaders, physicians, journalists, educationists and highly experienced social workers have established it for the welfare of rural and destitute people.We have undertaken several projects to provide these people with arsenic-free drinking water; we have also undertaken countless tree plantation programs in many areas of Bangladesh. We have also established orphanages, primary schools and charitable clinics at rural areas.
We, the Sufis who believe in the path of peace and love in attaining the nearness to the creator will have to make the people revisit the realm of the code of conducts as directed by our holy Prophet(sm) and teach them not to treat anybody as chattel or slave and discriminate others. And teach them to take care of the creation as real vicegerent of the creator of the universe.
Except this seminar Syed Saifuddin Ahmed attended at Los Angels Chinu Hils,Washington,Vergenia,Philidelphia,Bultimor& NewYork City in various seminars.On those seminars he preached the Sufistic Tarika of Maizbhandar and he talk about World Peace,Human Rights & for upholding Humanities.He continues the workshop as a moderator saying Durud & Zikr.
On his attending this seminar Shahjada Syed Mehboob-A-Mainuddin, Shahjada Syed Mashook-A-Mainuddin, Shahjada Syed Hasnain-A-Mainuddin was with him.